The Beach House by P.R. Black 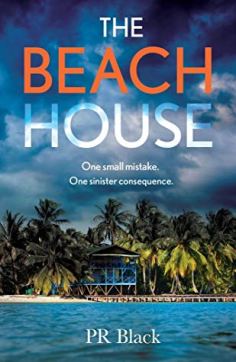 This vacation is about to turn deadly…

Cora’s on the island vacation of her dreams: a private beach in paradise, a romantic proposal, and an eight-figure cheque following the sale of her new fiancé’s business.

When their island turns out to be not so private after all, Cora tries to make the best of a bad situation by inviting their strangely friendly neighbours to celebrate with them.

I now know why the book blurb is rather scant in detail, its because its extremely hard to explain without giving anything away!

Even the style, which is reminiscent to some great late 80s psychological thrillers, and even naming them would be too big of a hint as to where this book leads you. And lead you it most certainly does, it leads you on a one hell of a journey all set to the backdrop of paradise.

What should be a trip of a lifetime turns out to be unforgettable in many, many ways, just not for the reasons intended. A remote, private island, only the two of them on the entire island, white sandy beaches, crystal clear blue ocean and on top of that, a marriage proposal and a business deal of a lifetime, projecting them from being reasonable comfortable money wise to insanely rich. Cora and Jonathan have it all, but their perfect life, their perfect holiday of a lifetime is about to change, only this time is not from anything good.

Paradise becomes a living nightmare as the pair discover they are not as alone on the island as they thought.

The book starts off fairly slowly with not a great deal of action apart form scene setting in the first half of the book, to the point I was close to giving up, but by god am I glad I didn’t! Perseverance and patience are paramount because what happens in the second half of the book thunders along at breakneck speed, leaving barely time to breath.

Just when you think you know what is going to happen, the plot gets turned on its head. Again!

A great read that has it all, stunning locations, love to hate characters, plot twists a plenty all bound together in a handsome looking cover!

The Beach House was published on 16 January 2020 and you can grab a copy from your local bookshop now or the link below.

A massive thanks to the author P.R. Black, publishers Aria for my digital copy of this book in exchange for an honest and independent review as well as my spot on this blog tour.

Author and journalist PR Black lives in Yorkshire, although he was born and brought up in Glasgow. When he’s not driving his wife and two children to distraction with all the typing, he enjoys hillwalking, fresh air and the natural world, and can often be found asking the way to the nearest pub in the Lake District. His short stories have been published in several books including the Daily Telegraph’s Ghost Stories and the Northern Crime One anthology. His Glasgow detective, Inspector Lomond, is appearing in Ellery Queen’s Mystery Magazine. He took the runner-up spot in the 2014 Bloody Scotland crime-writing competition with “Ghostie Men”. His work has also been performed on stage in London by Liars’ League. He has also been shortlisted for the Red Cross International Prize, the William Hazlitt essay prize and the Bridport Prize.