The Single Ladies of Jacaranda Retirement Village by Joanna Nell 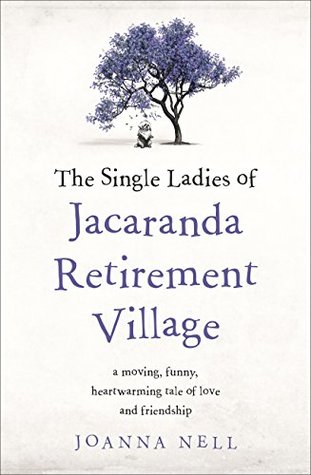 A moving, funny, heartwarming tale of love and friendship, for anyone who loved The Unlikely Pilgrimage of Harold Fry, The Keeper of Lost Things and Three Things about Elsie.

The life of 79-year-old pensioner Peggy Smart is as beige as the décor in her retirement village. Her week revolves around aqua aerobics and appointments with her doctor. The highlight of Peggy’s day is watching her neighbour Brian head out for his morning swim.

Peggy dreams of inviting the handsome widower – treasurer of the Residents’ Committee and one of the few eligible men in the village – to an intimate dinner. But why would an educated man like Brian, a chartered accountant no less, look twice at Peggy? As a woman of a certain age, she fears she has become invisible, even to men in their eighties.

But a chance encounter with an old school friend she hasn’t seen in five decades – the glamorous fashionista Angie Valentine – sets Peggy on an unexpected journey of self-discovery. Can she channel her ‘inner Helen Mirren’ and find love and friendship in her twilight years?

Meet Peggy and her friends as they show us all how to grow old the right way!

Peggy, our main protagonist, an 80-year-old widower with an overactive bladder that has been the bane of her existence is such a wonderful character, she is almost impossible to not love and relate to, and what’s more she is a perfect advertisement for pelvic floor exercises ladies! (You will see why once you’ve read the book)

Although being incontinence isn’t funny, her trip to the doctor about it did have me chuckling for quite a while! She is referred to a specialist continence advisor who goes by the name of Sister Slack! Genius!

And then we meet the rest of the gang. Angie, a glamorous, empowered full of life character. Brian, the handsome widower. Celia, a motorbike driving geriatric and Jim, the retired rock star. An eclectic bunch that don’t have a bad bone between them.

One of the chapters is called ‘The Singing Machine’ and that is another fly on the wall chapter. The gang go on a shopping expedition to purchase a karaoke machine for their annual function that doesn’t go quite as smoothly as planned, you can almost see the salesman rolling his eyes and hear him tutting!

Another of my favourite chapters has to be ‘Angie’s Special Brownies‘ Unbeknown to them Angie has added a little something extra to the mix and they end up consuming hash brownies at their committee meeting resulting in a bunch of OAP’s all stoned with a fit of the giggles, and in turn their giggles become your giggles! Then the icing on the cake, the topics on the agenda for the meeting. One being complaints about excessive flushing of toilets during the night! It certainly sounds like a very memorable evening had by all! 😂

Even though Peggy is 40 years my senior I found her to be completely relatable in more ways than one, the terrible memory, the daily tally and ritual of tablet taking as well as her names of inanimate objects, a thingamajig, whatchamacallit, gubbins and the hunt for missing items around the house. Reading glasses that turn out to have been on top of your head the whole time, finding the remote control in the bread bin, the list could go on and on!

There are a few flashbacks to Peggy’s younger years where we get to meet her very dislikable mother and her husband Ted as well as their wedding day. ‘Trussed up in a satin circus tent!‘ conjures up a wonderful image of her wedding dress!

All in all this is a fun, lighthearted, heartwarming read with some wonderfully colourful characters about friendship, love, laughter and growing old whilst remaining young. No-one wants to get old but these five go to show that you are never too old to enjoy life.

‘You have to stop thinking like an old person. If you behave like an old biddy, people are going to treat you as one!’

One last thing, a piece of useless knowledge, the washing powder OMO back in the day, in squaddie language it used to mean ‘Old Man Out’ and wives would put a box of OMO in the window when the husband was away and they wanted a bit of male company! If you know what I mean! 😉

Breakout the brownies and the teapot and join Peggy and friends on a journey of growing old disgracefully!

You can grab a copy now from Amazon for £0.99 at the moment so go grab yourself a bargain, it is worth every penny I promise!

A massive thank you to the author Joanna Nell, publicist Jeannelle Brew and publishers Hodder & Stoughton for my copy of this book and making me part of this wonderful blog tour in exchange for an honest and independent review.