The Confession by Jo Spain 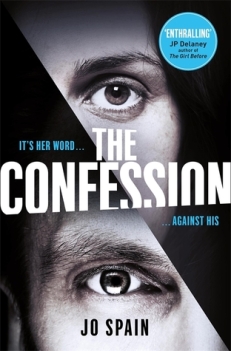 Late one night a man walks into the luxurious home of disgraced banker Harry McNamara and his wife Julie. The man launches an unspeakably brutal attack on Harry as a horror-struck Julie watches, frozen by fear.

Just an hour later the attacker, JP Carney, has handed himself in to the police. He confesses to beating Harry to death, but JP claims that the assault was not premeditated and that he didn’t know the identity of his victim. With a man as notorious as Harry McNamara, the detectives cannot help wondering, was this really a random act of violence or is it linked to one of Harry’s many sins: corruption, greed, betrayal?

This gripping psychological thriller will have you questioning, who – of Harry, Julie and JP – is really the guilty one? And is Carney’s surrender driven by a guilty conscience or is his confession a calculated move in a deadly game?

YOU FIND OUT WHO DID IT ON THE VERY FIRST PAGE. ON THE LAST PAGE, YOU’LL FIND OUT WHY…

From the very get go this is a book that will grab hold of your imagination and not let go until you turn that last page.

This is the first book of Jo Spain’s that I have read and I now have her next book ‘Dirty Little Secrets’ on pre-order and if this book is anything to go by I can’t wait.

It is quite hard to review this one without giving anything away and I would hate to ruin it for anyone, it is one of those books that you need to read and discover for yourselves and let the twists and turns make your head spin with no outside influence!

“It’s the first spray of my husband’s blood hitting the television screen that will haunt me in the weeks to come – a perfect diagonal splash, each droplet descending like a vivid red tear.

That, and the sound of his skull cracking as the blows from the golf club rain down”

It makes sure it has your attention straight off the bat, or should that be club? 😂

Some brilliantly crafted characters and some wonderfully written intrigue this is one for any fan of this psychological thriller genre. I just wish I had read this one sooner and Jo Spain’s other books will now be heading to my ever-increasing tbr pile!

You can grab a copy of The Confession now

A big thank you to the author Jo Spain, publishers Quercus Books, Crooked Lane Books and NetGalley for my copy of this book in exchange for an honest and independent review.