The Burning Hill by A.D. Flint 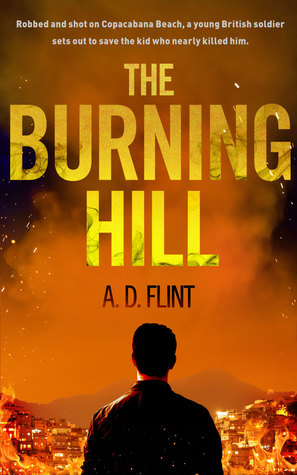 On the run from unjust court-martial back home, a young British soldier gets robbed and shot on Copacabana Beach. The bullet in Jake’s head should have been fatal but, miraculously, it saves him from a previously undetected condition that soon would have killed him.

Jake doesn’t believe in fate, nor does he feel he owes anything to anybody, but he does hate injustice. Vilson, the teenage favela kid who fired the bullet, is a victim of injustice, in a deadly corner with a corrupt cop and a sadistic drug-lord after his blood.

With a turf war erupting in Vilson’s favela, fear stalks every narrow alleyway, and anyone dragged up to the notorious Burning Hill had better hope they’re dead before they get there. But it’s not just fear that shapes life in the favela: belief is also powerful, able to both save and destroy.

The Burning Hill is about the power of belief and one man’s desire for justice at any cost.

Listen to a sneak peak here!

I had planned to do a plot summary however the book blurb above from Good Reads more than covers that and any further in-depth plot summary’s would give you to many spoilers and I wouldn’t want to do that! Its one you most definitely need to read for yourself!

Reading the author bio goes some way to giving this story a more human, more real layer and made me appreciate it all the more.

On a June afternoon in 2000 there was a robbery just a few blocks from where the author was living in Ipanema, Rio de Janeiro. It turned into a hostage situation. The teenage robber had survived a notorious massacre of street children outside a Rio church years before, and the tragedy that played out in the aftermath of the robbery on live TV news was an embodiment of the desperation of life at the bottom of the heap. An ugly thing in this beautiful city, shocking, even to a society inured to everyday violence.

As a Brit new to Rio, the author was beguiled by the city, and found it profoundly disturbing to watch something happening just down the road that was so out of control and so wrong. The author spent a year in Brazil and now lives on the south coast of England with his Brazilian wife and two sons.

As well as the author bio, a week or so before I started reading this book I had seen a video clip on twitter of people in Rio clapping and cheering as police threw the bodies of two young men they had just shot into the back of a truck which was quite graphic and as I was reading this book I couldn’t help but to see those young mens faces on Vilson and Babao so for me that added an even more real life, human element to the characters and plot lines.

I haven’t been this heavily invested in a story and set of characters for a long time, to the point I found myself dreaming about Vilson, Jake and the fulvela’s and woke myself up 5am – so obviously I started reading again 😀

The ending literally gave me goosebumps and brought a slight tear to the eye! That is something that doesn’t happen very often at all!!

Gritty, hard-hitting and utterly compulsive, this is a book that has you wanting to head straight back to page one straight after turning the last page.

This is an author to keep an eye out for and I would be at the head of the queue if there is to be a continuation from this book. Id love to see what the future has in store for the fulvela gang, my imagination has already been ticking over “what happened next” scenarios for them all!

Many thanks to the author A.D. Flint, publishers Unbound, publisist Anne Carter for including me on the blog tour for this book and NetGalley for my copy in exchange for an honest, independent review.