The Cottingley Secret by Hazel Gaynor 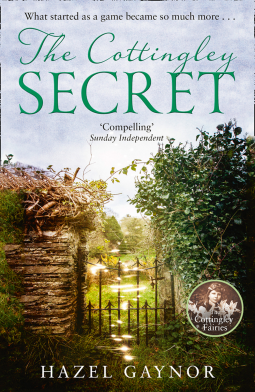 1917: When two young cousins, Frances Griffiths and Elsie Wright from Cottingley, England, announce they have photographed fairies at the bottom of the garden, their parents are astonished. But when the great novelist, Sir Arthur Conan Doyle, endorses the photographs’ authenticity, the girls become a sensation; their discovery offering something to believe in amid a world ravaged by war.

One hundred years later… When Olivia Kavanagh finds an old manuscript and a photograph in her late grandfather’s bookshop she becomes fascinated by the story of the two young girls who mystified the world. As Olivia is drawn into events a century ago, she becomes aware of the past and the present intertwining, blurring her understanding of what is real and what is imagined. As she begins to understand why a nation once believed in fairies, will Olivia find a way to believe in herself?

I had never heard of Hazel Gaynor but I had heard of the Cottingley fairies and had seen one of the famous photos but didn’t really know the story behind what actually happened so I was intrigued to read this book.

A blend of fact and fiction surrounding a series of photographs published in 1917 and 1920 taken by two young girls, Frances and Emily in the English village of Cottingley who claimed to have photographed fairies in their garden and captured the attention of a world at war.

With a parallel present day story line that ties in beautifully, Olivia Kavanagh discovers an ancient manuscript in the bookshop she’s inherited from her beloved grandfather. When she finds an old photograph she discovers that her own life is actually connected to the story.

In the end you don’t care whether the photos were faked, or if fairies really were seen. You are simply enchanted that someone can believe that something so magical exists.

You don’t need to believe in Fairies to enjoy this book but it might help if you suspend believes just for a little while!

This is a perfect summer read that will enchant even the stoniest of heart!